Get a free Quote

Our team eagerly looks forward to hear your requirement. 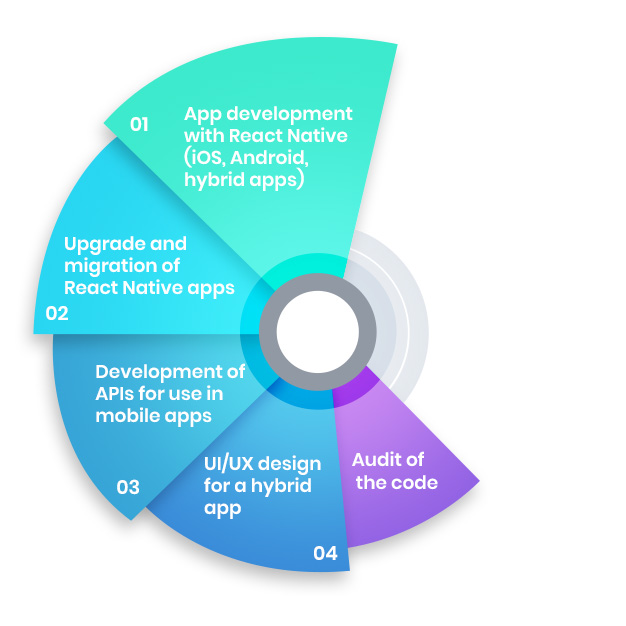 We use React Native to create high-performing mobile apps.

Our Mumbai-based React Native developers create engaging cross-platform mobile apps that are suited to your specific business goals. Our successful project delivery track record for Indian startups and organisations includes (but is not limited to):

When you work with Goyal Infotech, designing a fantastic app is as simple as tapping a few buttons.

When you hire Goyal Infotech to work on your project, you receive a team of designers, developers, and project managers who are dedicated to making your product a success. Our method is user-centered, with the goal of launching your product quickly and effectively while getting feedback and developing. We begin a project with in-depth user research and follow you through to post-launch support and maintenance.

You can direct the right competence for your project's success with an integrated team with several disciplines: software, user experience, advertising, and product development.

We are nerds who are fascinated by technology. Ruby on Rails, Node.js, React Native, Android, iOS, React.js, C#Java, Postgres (and other SQL), NoSQL are some of our current favourites.

Monitoring and test-driven development (TDD) We combine the strengths of best-in-class monitoring and TDD to ensure that your solution is stable and predictable on launch day and for the next 3,652.5 days (ten years plus leap days).

Mobile Apps are just the start

Because React Native is mostly written in JavaScript, your mobile apps are just the start. It's also a short step to sharing your code for some fantastic online applications.

Faster Time to Market Multi Platform development has the advantage of requiring less time. That means a well-designed software for many platforms that is ready to launch in half the time.

Because React Native leverages native components, your app's UI will seem natural on any platform you're working on.

What is React Native, and how does it work?

React Native is the next version of the React Javascript library, which is utilised by Facebook and Instagram. It is used by mobile developers to create native mobile apps since it allows them to reuse components across many platforms. It's a cross-platform framework that enables us to deliver Android and iOS apps more quickly and utilise more of our team's JavaScript expertise.

Why should you use React Native to create your app?

To get why React Native is so beneficial, one must first comprehend the two primary approaches to developing mobile apps:

Apps written in native code – Java for Android and Objective-C or Swift for iOS – are known as native apps. They have the best performance but are the most expensive to produce because each operating system requires a separate build.

Phone apps with a browser view are referred to as hybrid apps. They are less expensive to develop because they only need to be built for iOS and Android. Hybrid systems, on the other hand, use HTML and CSS to emulate native components, which typically results in poor performance.

Developers may use React Native to create apps for both iOS and Android while sharing code. This is particularly cost-effective and, in most circumstances, performs as well as native apps.